At the beginning of Katherine Chandler’s play, ‘Hood’ we were told in no uncertain terms that we were about to be ‘told a story’. We were assured (by four hooded characters, planted in the audience) that this story wouldn’t be too long and it wouldn’t be boring. And they certainly weren’t wrong!

The moment the lights came up, we were immersed in the monochrome world of a struggling, working class family in contemporary Britain. Chandler’s play was written in 2015 but the points she makes are perhaps more relevant now than they were in the pre-Trump / pre-Brexit era; she highlights the injustices felt by the voiceless and penniless children who are at the heart of this story.

Whilst the play undoubtedly made some hard-hitting and important points, the audience were also treated to some very funny moments. Some of these came from the use of puppets: as part of the style of the play, every adult character (except one) was staged using some beautifully-choreographed puppetry. It was impressive how the lifeless, brown-paper, puppets suddenly became real under the expert attention paid to them by the actors. The moment when the children’s mother ‘runs away with a bacon-licking vegetarian’ showed the two puppets re-enacting the Dirty Dancing lift to ‘I’m having the time of my life’. The audience were in stitches!

All the cast brought an enormous amount to the production – the time that went into rehearsing the puppetry movement alone must have been considerable. Charlotte (Yr 12) played the titular character beautifully, capturing moments of gut-wrenching poignancy, whilst also being able to deliver the comedic lines when needed. As an audience we cared about her character and this is a credit to her acting and the work she put into the poignant creation of this role. The portrayal of the rest of the family was also fascinating and it is a testament to the acting prowess of these junior actors that they created characters who accurately portrayed the irritation and love which all siblings have for one another in equal measure.

‘Tuck’, the young social worker/vicar was played by Ben (Yr 12) and he was a character who the family, and by extension the audience, warmed to as the play progressed. Tuck provided the opportunity for this family to move off the lowest rung of the social ladder and we loved him for it. In a scary world, he provided some hope and his name which combines the idea of food and a benevolent friar in Robin Hood (a story which has resonances throughout this play) was extremely appropriate.

The efforts made by the backstage crew must also be commended. From the two-tone black and white set, to the dishevelled costumes and the slick lighting and sound, the entire team led by Stage Manager, Bray, (Yr 12) must be very proud of the world they created.

Finally, it was excellent to see that the production were also working with Child Poverty Action Group (CPAG), a charity which supports young people living below the poverty line in the UK. All the proceeds from the refreshments, as well as all the donations given by audience members came to more than £650. This is such a great achievement. Very well done to everyone involved! 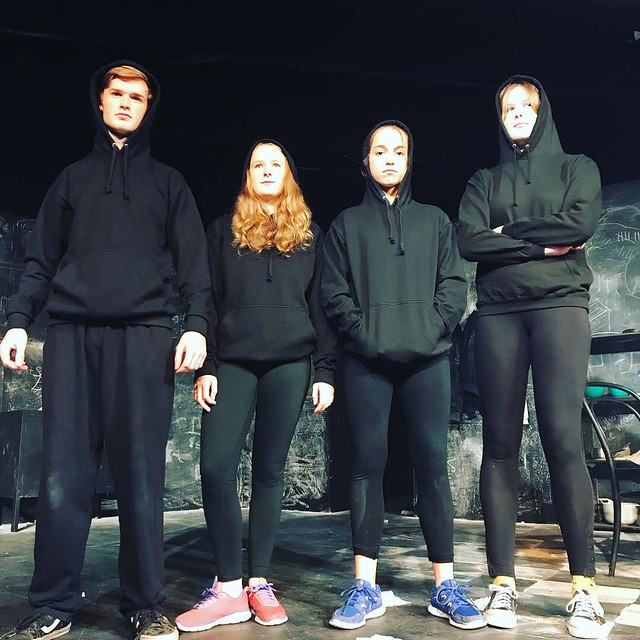